What is English and What is Literature?

Many times people get confused as to what the exact origins and definitions of English and literature are. William Whitla offers an understanding of both of these concepts in his book The English Handbook. He believes that English, also known as ‘the Queen’s English”, can be seen as a lot of places official language around the world. The English language was originally made up of Tectonic Vocabulary from the fifth century. Along with this, it showed a great deal about one’s education if they were taught classical letters. If one were to know classical letters it meant one knew about the literature and culture of Greeks and Romans.

Literature, on the other hand, is different from English. What is known as “Literature in English” could actually be constituted to mean a variety of things, such as American, African, or Caribbean literature. Literature has often been seen as an “embodiment of a nation’s culture” as it teaches a lot of moral values.

According to Whitla, there are 3 primary values of literature:

Whitla also lists out various claims for values that literature could also perceive as doing. People believe not only could they be a source of pleasure, but also teach truths and be used as methods of reasoning and forming arguments. Others believe that it teaches readers to be skeptics as well as provide the reader with major concepts and words.

A huge part of literature is the canon. The canon can be seen as “closed” which does not include an abundant representation of women, gays, lesbians, working-class writers, and popular literature. There is also not a huge inclusion of various ethnic diversities. A reason for why it is so “closed” is because it is very patriarchal. Along with looking at the canon, it is important to look at the history of literary studies.

There are four ways to see history, meaning history can be seen as:

Being able to understand the history of English as well as literature is one thing. Learning how to interpret it and use certain skills to become a better reader is another. This section mainly talks about history, the canon, and the importance of historical background and literary criticisms. The next section will focus on how one can apply various skills in close-reading to take their understanding of literature to the next level.

From Opening a Book to Critical Analysis 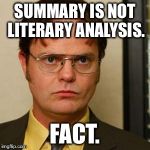 What is the best way to read a book? This is a question posed in the minds of students, scholars, and readers alike. Whitla offers a guide on how to read a book in the most efficient manner. The first step that should be done when opening a book or studying an article is: skimming the text and getting an overview. How do we do this? First, we should note the author and what angle the title of the piece takes on the field of study. Second, scan the table of contents and get a general sense of what is to come in the text. Lastly, look at the opening chapter, paragraphs that follow, and focus on the main sections (29-30). Another efficient way to get a sense of the work you are reading is to create an outline or summary. Map the text- creating an outline and adding a list of words or points to that outline that you think is the most important to that work.

There are several levels to read a text.

As you can see, with each level progression, the skill of reading becomes for advanced or intense. The literal level of reading a text- reading for content, wants you to ask the question, What Happened?  You should focus on the narrative of the story. What fields of knowledge is the text based on? What are the grounds for these value judgments? Are the criteria aesthetic? Ask yourself these questions while you read for content. The formal level focuses on HOW the story is told. What is its form? What is the shape or structure of the text like? Focus on textual organization, structure, and pattern while you read for content and form. The expository level of reading wants you to read in the form of an argumentative analysis. Ask yourself, what is the point of this text? It is all about exposition and explanation. The comparative level has you compare your work to other works, sometimes explicitly and sometimes implicitly. You should consider parallels of the characters, setting, and theme. How are other works associated with your work and what does that imply? Finally, reading for the analytical level is all about context. You should place the argument and theme of the text in a comparative frame. What is going on historically in the context of when the work was made? And how does that influence the work itself?

As you can see there are many ways to close read a text, all of the important to gaining a better understanding of the text itself. Some key takeaways on what to look for in a text are:

If you do all of this describe you will be an expert close reader! These steps described take you from opening a book to crafting a critical analysis on it. Don’t forget to annotate the heck out of your work too- underline key words, write key comments, number things, and note rhetorical devices (42).

Performance plays an important role in contemporary society: whether that be within television, movies, Broadway, politics, athletics, the internet and many other forms found in today’s culture. However, this important aspect could not be communicated through so many mediums without the expression of performance within literature. In his chapter on Drama, Whitla expresses the shifts in the theoretical and institutional situation of the genre within plays, drama, theatre, and performance in universities (118-119).

There remain four historical phases of the teaching of drama as literature within educational institutions. Phase 1 began with English departments in the late nineteenth century, where scholars taught their students works from classic Greek and Roman plays, Shakespeare, Oscar Wilde, and works of the post-moderns. Phase 2 lasted from 1914-1917, where the architecture and organization of scenes came into the picture. Phase 3 incorporated more theatrical mediums, such as plays themselves, and phase 4 introduced the parallel movements of the visual arts, otherwise known as “performing arts.” With performing arts, the action of performance grew onto more mediums not limited to paper, but rather studies within shows such as improvisation, political theater and street theater (120-121).

Many consistencies remained with the teaching of the genre, including the study of many iconic playwrights and performers, such as the works of William Shakespeare (121). As the study of drama grew within educational institutions over time, more people began to recognize the beauty of complexity within a text, recognizing the details ranging from its setting to the actions of the characters. In addition, consistent topics within the genre reached as far back to the teachings of Aristotle, such as the focus on the protagonist and the antagonist in a piece. By connecting with two entirely separate characters, the patterns of a reader’s response changes, representing a complex range of emotions for the reader to analyze themselves (125). This element of drama essentially fuels emotional attachment to the plot of the story while connecting the piece to occurrences that appear in the reader’s actual life.

Drama, as a genre, encouraged the aspect of conflict within the structure, plot, setting, and relationships between characters within a literary piece. While reading plays, a reader should focus on the style of the dialog, identify the setting and characters, and read the italics in which the actions are being expressed regarding the actors’ movements. Also, asking oneself questions regarding the stylistic elements of the piece, such as its writing structure or the gestures and actions of the characters, will strengthen the analysis of the text. This way, the reader can visualize the play without physically seeing it. Here, they will get the best possible outcome of understanding what, how, where and when the piece remains, and how these aspects compare and differ from real-life occurrences (142-147).

Poetry, according to Whitla, can be defined as a concentrated “composition in verse with a lavish use of rhetorical devices and figures of speech” (176). Poems concentrate on the shape of the overall poem itself. Additionally, it is important to recognize the form of each individual line: its arrangements, rhythm, and the way it adds substance to the poem’s overall structure. Poetry remains both the product of history and the product of the reader, that meaning poetry changes and adapts as literature, language and semiotics change over time. Society’s analyses of poetry expand as people recognize the structure of poems in more detailed forms, learning to deconstruct, recognize patterns, and add onto previous intel on those poems (177-179).

According to Whitla, the best way to read a poem consists of these simple steps: read the poem once, ask what it is about, identify the themes, structure, and tone of the poem, then recognize the characters and the setting. After this process, one can notice more detailed aspects of the poem, such as the lengths of lines, continuity, pauses, sounds, and patterns that catch their eye. By using these steps, the reader can benefit by subjectively analyzing the poem, and eventually use these skills to become an addition to the anthological process of analyzing any poem to its fullest potential (181-183).

The Canon is a forever expanding collection of works of both historical and contemporary pieces of literature. Poetry in the Canon includes many great poems and poets, including that of “…Shakespeare, Chaucer, Milton, Dryden, Pope, Wordsworth, Tennyson, Robert and Elizabeth Browning, and T.S. Eliot” (178). The Canon is expanding to incorporate more textual diversity and expose students to more contemporary pieces regarding the oppression of race, gender, ethnicity, etc (179).

In order to create a poem:

One must utilize musical elements in order to do so. For example, prosody defines as the “accompaniment to a song set to music, the tone or accent on a syllable, or the mark to show it” (190). It involves the science of versification, or expressing ideas in verse (190). In addition, Rhythm defines as the musical beats that live within the sounds. A meter is the regular rhythmic patterning of stressed and unstressed syllables at the level of the line. Each line is called a verse, and a “paragraph” of verses is called a stanza (191). These terms are frequently used to create poems to create a more entertaining platform for their readers to follow.

An example of prosody would be, “shall I comPARE thee TO a SUMmer’s DAY?” (5 units). The capitalized parts of the words are the stressed syllables and vice versa.

In order to analyze a poem’s rhythm:

Poetry readers utilize the process of scansion (193), or the method for recording the particular meter of a poem by:

This process helps the reader determine the purpose of the rhythm poem. By using the practice of scansion, readers are able to understand points of the poem they would not be able to without such processes.

As the Canon expands, our analyses of poetry expand through the determination of a poem’s semiotics, structuralism, intersectionality, and deconstruction. As readers of poetry, our subjectivity is our greatest asset. Different people approach the poem with knowledge of both their own histories and cultures, as well as the histories and cultures that shaped the poem at the time it was written. As readers, it is our duty to expand the poetry-reading process for future generations, and that process should start now!